skip to main | skip to sidebar

The Battle goes on

This week I was searching the web for information about life after breast cancer to better understand how I could help Dianne. I found an paper from the Journal of Clinical Oncology by Hester Hill Schnipper titled Life After Breast Cancer (and yes, this is the type of reading you do once cancer enters your life). The introduction to the paper really struck me as to what is going on in Dianne's life, and mine, at this time:

SHRUGGING OFF her mink coat, Meredith Powers settled into the comfortable chair in my office. A 40-year-old single woman, she had completed her active treatment for stage II breast cancer 3 months earlier. Through the months of surgery, chemotherapy, and radiation, she had maintained most of her normal life routines and insisted that breast cancer was a disruption that could be managed. To her astonishment, she now found herself overwhelmed with emotions and unable to function. She called her medical oncologist when she could barely get out of bed in the morning and found herself weeping uncontrollably. As she explained that she had never before felt so out of control and that she was "baffled" by her feelings, she began to cry.

As we began to talk, it was clear that she was struggling with many problems that were new to her and that were directly related to her diagnosis and treatment. She was exhausted and very frustrated with her diminished level of energy. She was angry with many of her friends and worried about being a burden to her family. She was unhappy with her body and the changes due to her cancer; she hated waiting for her hair to grow and felt "fat and ugly." She worried about her performance at work and her limited options considering a career move. She wanted her old life back and was starting to understand that was impossible.

Beside not having a mink coat, and being married instead of single, much of this story describes what Dianne has been feeling since the end of active cancer treatment (December 08). The paper goes on to say:

The crisis of breast cancer does not abate with the final chemotherapy or radiation treatments. Indeed, in many ways, the real crisis is just beginning. How do you learn to live with the sword of Damocles ever dangling? How do you come to terms with the changes in your body as well as the changes in your perspective? How do you manage the changed relationships and the intense emotions that continue into the future? These are questions with which the patient will have to struggle, as life is slowly reclaimed. Recognizing that there are existential issues that must be examined by each of us in our own hearts, there are predictable problems in many other areas that can be addressed by caregivers...The challenges of survivorship are many. More than anything else, it is the searing recognition of mortality that changes everything. From this moment forward, all of life will be viewed through a double lens as we appreciate the possibilities of both a long life and a greatly abbreviated one. This dual view may actually, over time, enrich our lives. We make a conscious and willing choice, each of us living with cancer, to go on, to take and to appreciate the darkness as well as the sunlight. We hold dear the night as well as the morning.

This is how Dianne is doing. This is how we are doing. If you want to learn more about life after breast cancer, you can read the full article at:

Please continue to pray for our family, the battle is not over.
Posted by duffyzoo at 11:15 AM 5 comments:

Not Scarred by the Scar

(These events occurred after my second surgery for papillary thyroid carcinoma in April  2009.)

A few weeks before my surgery, my 13-year-old son, Jon, was a little more excited about the upcoming event than me.


He enthusiastically commented, "Yea, cool, mom, so are you nervous? Like they're going to go in there and slash you open and look for the cancer!"

I bit my tongue, for about five seconds, then calmly informed Jon that I was his mom, I loved him and I didn't take offense, but warned him against speaking that way to any other cancer/surgery patients. I'm not sure if he got it or not.

My husband, Scott, was a little more dramatic when I first removed the cool white foam neck guard and dared look at the 6 1/2 inch scar, that extended more than half way around my neck and up to my right ear.

"Wow, you look like you got ripped open with a chain-saw!"

He did have a clever solution later, when we discussed the near-certain probability of future surgeries. "Hey, they should have just put in a zipper, so instead of another surgery, we could just zip it open, take out the cancer and zip it back shut."

Why didn't my doctor think of that?

Another comment came on Sunday morning during coffee break at church.  My always-laughing friend, Betty, admired my scar and said, "They really sliced you open this time!"

It really was fair game. When she came to church with a band-aid on her nose covering the spot where they removed skin cancer I glibly asked her if she cut herself shaving.

I guess we're even. 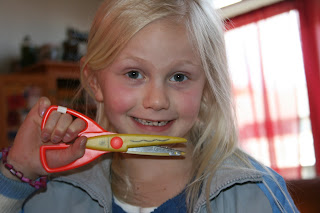 After my 6-year old daughter, Rebekah, got used to the scar, she had news for me.


"You know what it looks like Mom? Let me show you!"

She dug around in the scissors drawer until she came back with this pair and held them up triumphantly. She asked me if the doctor used scissors to open up my neck. We must not have satisfied her curiosity, because a few days  later she questioned us further.

"Did they use a plastic knife or a sharp knife?

I needed clarification. "Do you mean when they cut me open for surgery?"

Daddy decided to add his expert commentary. "They used a sharp knife."

Mom, "No, a sharp metal knife. It is called a scalpel. It's sharp so it doesn't hurt. They use it once and throw it away."

I have been thankful that we have been able to communicate about something that is horrible and scary - cancer. Teasing and joking are acceptable methods of dealing with stress, and I am thankful my kids and husband  felt comfortable enough to tease me.  That is normal for us.  Normal feels good.

The scar doesn't bother me. I don't cover it with a scarf, I don't cover it with makeup.   Maybe because I'm happily marrried and my husband doesn't care. Maybe because I am getting wrinkled and gray and one more flaw can't make that much of a difference. It also helps that at 5 foot 2 inches, I am shorter than most people and they are looking down on me and don't really see my neck.

I also look at my scar as a symbol of overcoming.  The Lord has been my strength and my song, and many prayers have padded the rocky road with peace and comfort. A nurse told me to wear it proudly, because I was alive. 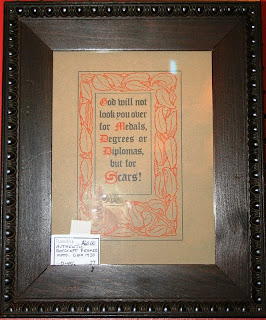 I loved the saying on this framed text in an antique store - not enough to buy it, just enough to photograph it.

By the way, I consider this photo spiritual foreshadowing.  I saw this two weeks before I found out my cancer had returned.  The Lord was preparing my heart.
Posted by Mindy at 11:08 PM 5 comments:

I purchased an additional bookshelf. This means I was able to pull many books out of storage and keep them within arms reach: books I've read, books I barely remember buying, and some I forgot that I have. In this process I came across "Before I Say Goodbye" by Ruth Picardie. I sat down last night and read it. I found myself relating so well not only to Ruth's situation, I also related to her, albeit English, sense of humor and methods of coping.

In the book, she tells her husband who is on list A and who is on List B of people who are allowed to attend her funeral. She talks about her disgust with funeral rubber neckers. We all know them. These are the ones who weren't especially close to the person who passed and they show up at the funeral hoping to be seen by the funeral attendance takers thereby earning a label of not only close [insert relationship] of the deceased, also horribly bereaved funeral attendee. It amuses me because I have told my family the same thing. I've instructed them to hire bouncers for my service to throw out people who simply do not belong there, the ones who are in it for visibility or public relations purposes.

That way no one in my family will be burdened with receiving overly dramatic condolences from people whose names they've never heard or look at each other shrugging at the wailing fatty in the corner who none of them recognize.  We all know these people who show up even though the deceased barely knew them or may have even disliked them, however they take up space hoping it will help them in the ever-after.

Since I fancy myself somewhat a celebrity (yes, these delusions preceded my illness), I initially considered giving out admissions tickets; but even my closest friends would scalp those suckers in a flash if it meant being able to buy a pair of Christian Louboutins. That's why they are my friends!
Posted by Super Jennie at 1:03 PM 5 comments:

New to this blog?